Global uncertainty is on the rise; ranging from the UK election next week and the impact it may have on Brexit, to the stalled US-China phase-one trade deal and fresh tariffs that are supposed to be implemented on December 15th 2019. The risk-off mood since the start of December provided a boost to gold, and this precious metal has created a series of higher lows and higher highs. This bullish chart pattern may extend farther to the upside if bullish momentum recovers from current levels; the advance was halted as gold reached its short-term resistance zone.

The Force Index, a next-generation technical indicator, descended together with price action as bullish momentum faded. Before the contraction, the Force Index eclipsed its descending resistance level on two occasions as marked by the green rectangle. It was unable to maintain those gains, and this technical indicator moved below its horizontal support level, turning it into resistance. The slide extended below its ascending support level and into negative territory, placing bears in charge of price action. The Force Index stabilized and is now anticipated to recover to the upside. You can learn more about the Force Index here.

As the bullish chart pattern developed through a series of higher highs and higher lows, the Fibonacci Retracement Fan was redrawn. The new starting point is found inside its support zone, located between 1,445.42 and 1,456.01 as marked by the grey rectangle. During the advance in gold, the 38.2 Fibonacci Retracement Fan Resistance Level remains key for more upside in price action. It has reversed a previous reversal and has now halted a move to the downside; if it can hold, an accelerated move by this precious metal into its short-term resistance zone is likely to follow.

With a critical week approaching financial markets, traders may be attracted to safe-haven assets, but volatility is expected to remain elevated. An advance in gold into its short-term resistance zone, located between 1,483.38 and 1,490.72 as marked by the red rectangle, will create another higher high and keep the long-term outlook bullish. It will additionally allow for a breakout to materialize and extend gold into its next long-term resistance zone between 1,508.01 and 1,515.64. More upside is possible, but a short-term fundamental catalyst may be required. You can learn more about a breakout here.

In case of more downside in the Force Index, aided by its descending resistance level, this precious metal could attempt to force more downside. The long-term fundamental outlook remains extremely bullish and any correction in gold into its support zone should be considered an excellent buying opportunity. A breakdown below its support zone remains unlikely given the current global outlook heading into 2020. 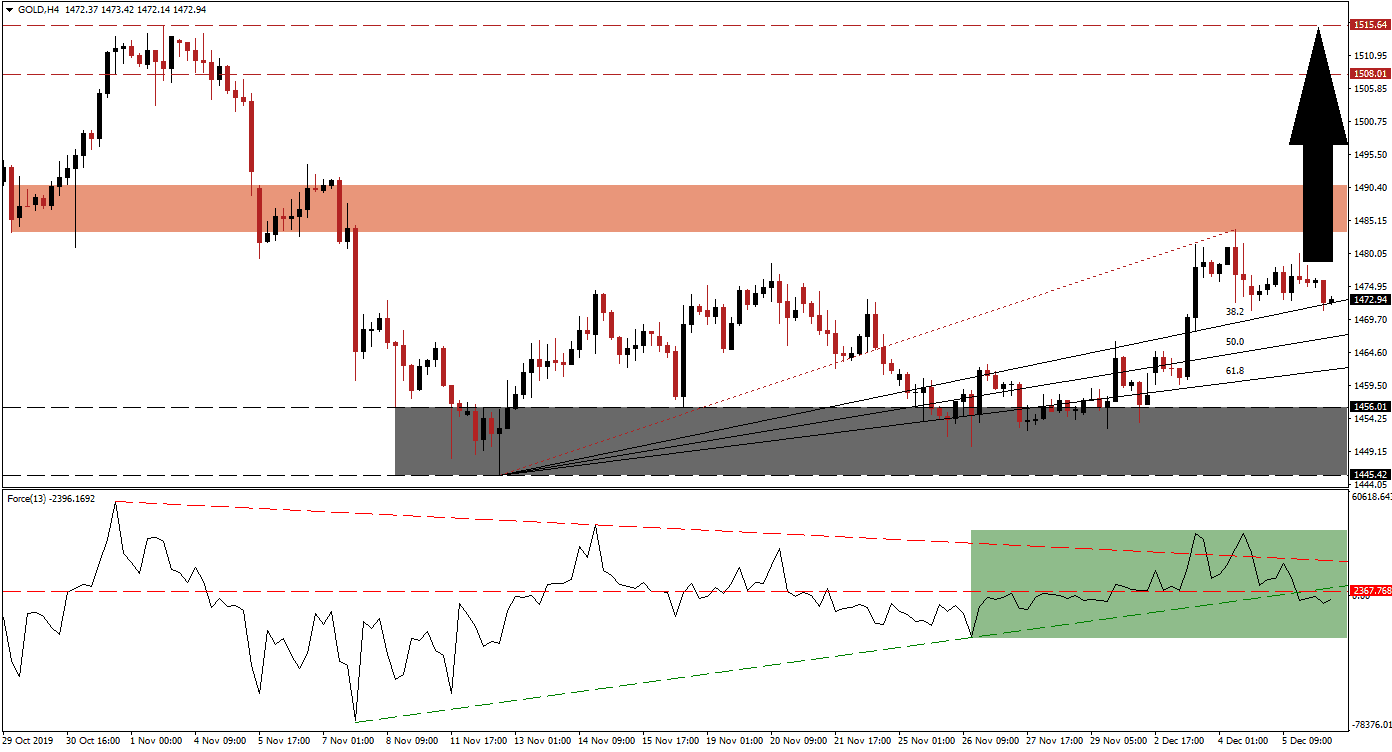 THEME OF THE WEEK : FEAR

A WEEK TO REMEMBER

Gold: Will Bullish Momentum Recover to the Upside?

Follow us on social media to stay up to date on our events:

Trading foreign exchange on margin carries a high level of risk, and may not be suitable for all investors. Past performance is not indicative of future results. The high degree of leverage can work against you as well as for you. Before deciding to invest in foreign exchange you should carefully consider your investment objectives, level of experience, and risk appetite. The possibility exists that you could sustain a loss of some or all of your initial investment and therefore you should not invest money that you cannot afford to lose. You should be aware of all the risks associated with foreign exchange trading, and seek advice from an independent financial advisor if you have any doubts.